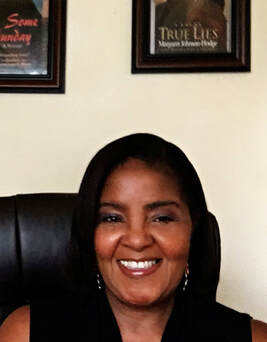 Margaret Johnson-Hodge is the author of thirteen published novels, contributor to three anthologies, including the highly successful “Proverbs of the People,”  a chapbook and a biography.

Her works were considered by Showtime and Hallmark for book-to-movie options. Her novels have been used as part of the English curriculum at University of Wisconsin – Eau Claire, where she was guest author, and was invited by Harvard University to submit a short story for their literary magazine.

Her novel “A Journey to Here,” was nominated for Book of the Year, “The Real Deal” won Reviewer’s Choice Award, and “Butterscotch Blues” made the Essence Magazine, Blackboard and Black Expressions Bestsellers list.

Margaret has been featured in major papers in her hometown, and a guest speaker at Georgia’s Writers, Inc. Her novels have been carried by various Bookspan book clubs, including Doubleday Book Club, Book of the Month Club along with the Literary Guild, and were ‘Main Selections’ for their Black Expressions Division. Her novel “Red Light Green Light” was declared ‘a classic in years to come’ by Midwest Book Review.  When her county libraries were facing closing, she was asked to write an Op-Ed against it for the Atlanta Journal Constitution, and she happily obliged.

Her works have been described as ‘visceral,’ ‘brutally honest’ and ‘refreshing.’ She sees her characters as onions to be peeled, slowly going through those layers, revealing all that they are and aren’t, and in the process, getting to their ‘truths’—the good, the bad and the sometimes ugly, but always authentic, and always real.

Margaret also gives writing workshops throughout the year which have become extremely successful, ranking her high marks and full-to-capacity crowds. She recently gave one for the Georgia Writers Association where registration was the highest ever recorded. Currently, Margaret is offering her workshops on line, open to anyone who wishes to participate.

Born and raised in New York, Margaret now calls Atlanta, Georgia home but New York is where her heart remains. She continues to craft stories about the great city in which she grew up in, and looks forward to telling more of them. “There is always some story inside of me” is how she sees it “and I just try and get it told…” Writing is truly her life.