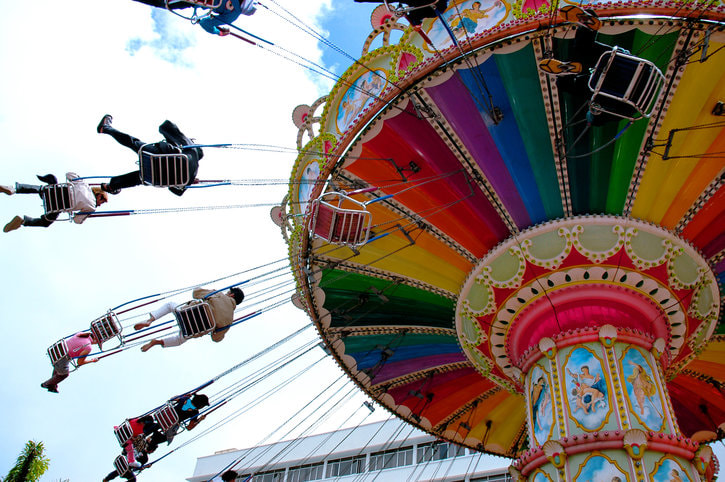 I was scrolling through the morning news feed on Yahoo this morning and saw an article someone wrote about waiting three hours to get into a venue at a Theme Park. Not reading it, I chuckled to myself, rushed with memories of me and my husband’s own attempts to give our children the ‘experience’ of a lifetime…ten-hour road trips from NW Atlanta into the belly of Orlando; me passing subs sandwiches from Publix and cold drinks from the huge cooler from the third bench that I chose to take the trip on in our huge, gas-guzzling, but comfy SUV. Not quite getting through Macon, Georgia before the question of   “How much longer?’ and “Are we there yet?” began to arrive.
Endless highways of black asphalt and tall pines and oaks zipping past the car window. Radio stations going in and out, going from R&B to Country Western music without warning as we moved from county to county. There were the mental configurations of a road map I’d glean a few times, clicking off towns in my head as we pass them and calculating ‘how much further’ and bathrooms stops at gas stations, filled with too much junk food, expensive cold drinks and toilets stalls you hoped were cleaned.
With my husband behind the wheel, my mother in the front passenger seat, my three kids on the second bench and me and the snacks on the third, that comfy luxury SUV began to feel less comfy with each town marker we passed. But my husband and I were determined to give our young children that ‘experience of a lifetime’ of not one themed park, but two—Disney World and Universal Studios, respectively.
I remember finally reaching our destination—my sister’s beautiful home in Orlando—and stepping into a wide space full of roaring A/C, sofa’s, chairs, beds, and best of all, no more long road trip. We settled in, relaxing for the first time in nearly half a day and made plans for our great adventure in the wonders that is Orlando.
Hot sun, long lines, expensive foods (could not take any thing to eat into the park) tons of people, rides we could all get on, rides only the children dared and last but not least, pricey admission tickets—we were a group of six.  My husband and I did see the joy on our children’s faces and even my mother’s as we spied the famous Disney Castle, experienced a few live-action shows complete with roaring real fire and sprinkler-generated tornado rains. Remember “Twister?” (we were warned where the ‘gonna get wet seats’ were and decided to go for it.
We stayed late into the evening for the famous Electric Parade, which transformed my mother back into a youngster—the joy from seeing it filled her whole being. and the next day, though tired, we went headed out for more family fun.
We were there for five days, driving here and there, getting more tired by the day, but me and my husband pressed on because we were giving our children the ‘experience of a lifetime.’ And though they did enjoy it, soon after it became just something we did as a family.
It never materialized into that great childhood experience we hoped it would be. Just became bounded up with trips to the Smoky Mountains, family reunions on Caribbean Islands, local county fairs and backyard barbecues for the Fourth of July. It never became that ‘magical time’ of their youth; simple things like Thanksgiving when everyone was still alive to celebrate did.
My children did gain their favorite rides—The Hulk—which stayed a little deeper in their memory banks, but when we stopped visiting Disney in later years, focusing on Universal, no one of them blinked or cared. What did remain front and center as they grew into adulthood were the simpler times of being with family—huge gatherings where we came together to break bread, retell old family funny stories and the warmth of simply being together in a grandmother’s, auntie and uncle’s home. That is what they remember the most. It’s what I remember the most too…